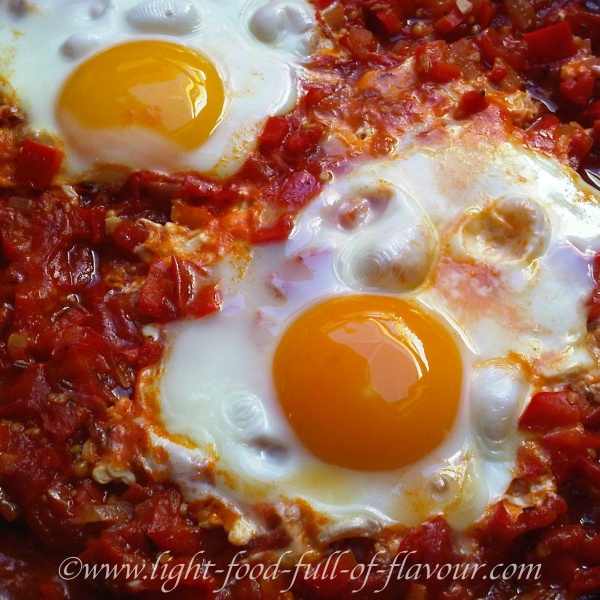 It might not be something you would eat before running off to work but it is a perfect dish to eat as a late breakfast on a day off – or as a light lunch. I serve it with lots of peppery rocket (arugula) leaves and watercress and some really good bread.

It is such a colourful dish and I think it is also great food for a kick-start on a day after a party! If the colours alone don’t do the trick, then the kick of the spices most certainly will.

Turkish menemen is the kind of food that puts a big smile on my face.

You’ll find similar dishes in other countries – such as Mexican huevos rancheros and a Middle Eastern dish called shakshouka which are both mostly eaten as breakfast.

1 large red chilli (or more if you really want to kick-start the day), finely chopped

1.    Heat the oil in a frying pan over a medium high heat. Add the fennel, cumin and mustard seeds and fry for a couple of minutes until the spices are aromatic.

2.    Add the chopped onion, ginger, garlic and chilli to the frying pan. Continue to fry for 5-7 minutes, until the onion has softened. Add the chopped red pepper and tomatoes. Season with salt and pepper, stir, cover with a lid and simmer for about 10 minutes until the sauce has thickened a little.

3.     Check the seasoning, then crack the eggs on top and leave the sauce to simmer gently until the eggs are cooked to your liking.

Place the frying pan in the middle of the table and let everyone help themselves and add as much parsley and yogurt as they want plus watercress/rocket and bread. It is great, informal sharing food!