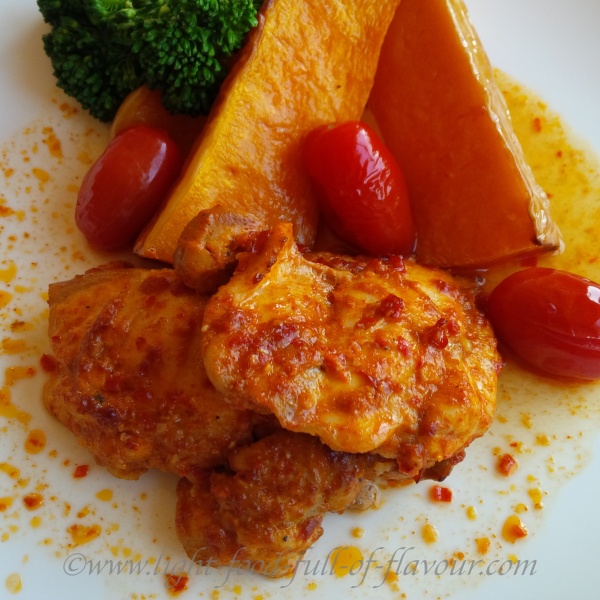 Choc-full of flavour and light! Oh yes, this piri-piri chicken with roasted squash is not only full-on flavour-wise, it is also low in calories.

And by serving it with a mixture of vegetables it becomes a healthy meal as well. I add tasty small tomatoes at the end of roasting and steamed or boiled vegetables such as the tenderstem broccoli (broccolini) in the photo.

Tomatoes and carrots are better for you when cooked – a rarity among vegetables. Cooked carrots release more beta carotene than raw. Cooked tomatoes have less vitamin C than fresh but the cooking makes the health-boasting lycopene in tomatoes more absorbable. Cook tomatoes in a little olive oil to boost lycopene absorption.

Tenderstem broccoli is by far the richest source of a phytochemical called “glucosinolates” – a very important anti-cancer and liver-friendly nutrient found in food.

You can of course add many more vegetables to this piri-piri chicken dish than I have done here – like roasted carrots, beetroots and parsnips and green vegetables such as beans and peas.

And it is always a good idea to also serve a salad with raw vegetables, topped with a tasty mustard-vinegar-olive oil dressing. A bit of mustard is good for you as it is rich in curcumin – a powerful antioxidant also found in turmeric.

1 small butternut squash, halved, deseeded and each half cut into 4-6 wedges

2.    Add all the ingredients for the piri-piri marinade to a small food processor and process until smooth. Place the chicken thighs flat in another oven-proof dish and smother the chicken with the marinade.

4.    Add the tomatoes to the squash during the last five minutes. Stem or boil whatever green vegetables you are serving as well.

Divide the piri-piri chicken and vegetables between four plates and spoon over the marinade from the chicken dish. Enjoy!

You can buy my book "A Tasty Way to a Healthy Life" as either a paperback or as a Kindle book on Amazon. It has all the recipes on my website + some new recipes which are exclusive to the book.