Traditional Spanish Gazpacho - And My Version Of Gazpacho 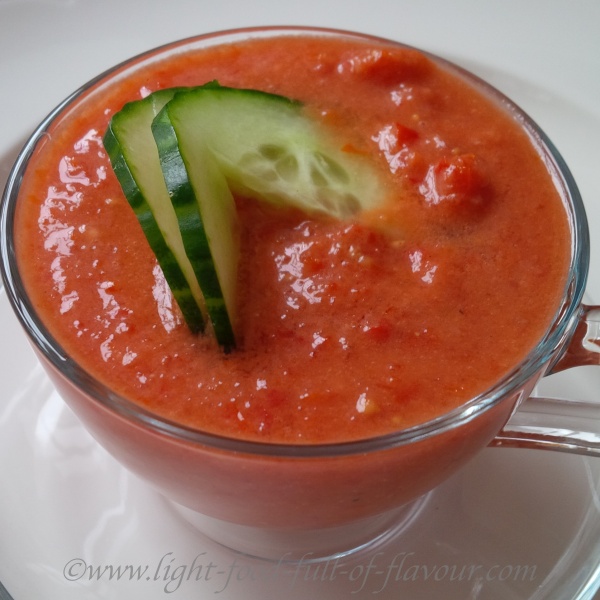 A very kind Spanish man once gave me his families’ secret recipe for a traditional Spanish gazpacho.

I was on a walk through the mountainous interior of Spain – it took me four weeks to walk inland from Malaga to the French border – looking for authentic Spanish food.

He told me that this recipe has been passed on from one generation to another in his family. I felt humbled that he was willing to share it with me.

The one thing that I think is absolutely essential for a good gazpacho is the quality of the tomatoes. The tomatoes I ate in sunny Spain were as sweet as candy.

You can buy really tasty tomatoes here in the U.K. where I live. It doesn’t matter what type of tomatoes you use – just make sure they are really ripe and fragrant tomatoes.

When it comes to vinegar, I suggest you use sherry vinegar or cider vinegar for the traditional Spanish Gazpacho. I use a mixture of cider and balsamic vinegar for my version though.

Apart from being sensationally tasty, this is also a really healthy soup. In the traditional recipe they add a slice of bread, I don’t. And while they add a green pepper (bell pepper) to their soup, I add a red one. I buy the pointed, sweet variety of peppers as they are usually so much tastier than the ordinary ones.

If you are adding bread, try using really good bread – like sourdough.

1/3 of a cucumber – roughly chopped


1.    Place the slice of bread in a bowl and pour over enough water to cover the bread. Take out the bread and use your hands to squeeze out the water. Add the bread and all the other ingredients to a blender or food processor and pulse until you have a relatively smooth soup.

I like it to be slightly chunky. Check the seasoning before serving.


For my version of Gazpacho:

A good pinch of black pepper


1.    Place all the ingredients in a blender or food processor and pulse until you have a relatively smooth soup. Check the seasoning before serving.